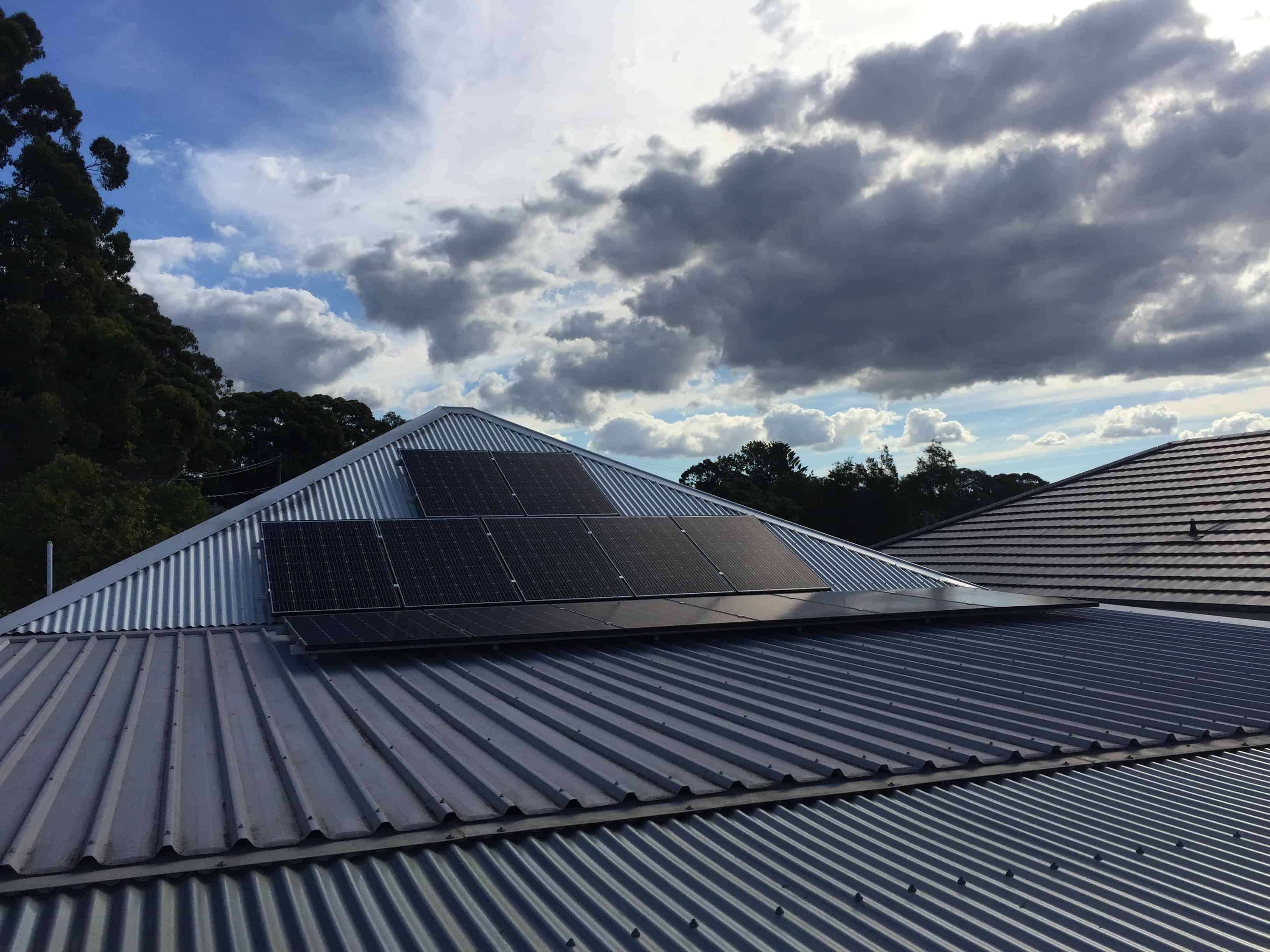 Our 6 flat and 7 eastern panels

How I got it

I initially got 3 quotes through https://www.solarquotes.com.au/, then got another couple of quotes from friends who work in the industry, 1 from a start up I was interested in, then finally one from a local installer who installed my friends system in Como a couple of months prior.

I decided on the local installer, as he did a great job at our friend’s place, where previously 2 other installers had arrived with panels but walked away as it was such a challenging job. He was also very honest with his advice on the phone, was happy to ask Ausgrid to go over 5kW (others wanted a quick 5kW sale) and made the effort to do the quote with the panels laid out how I requested. Plus his price was very competitive. 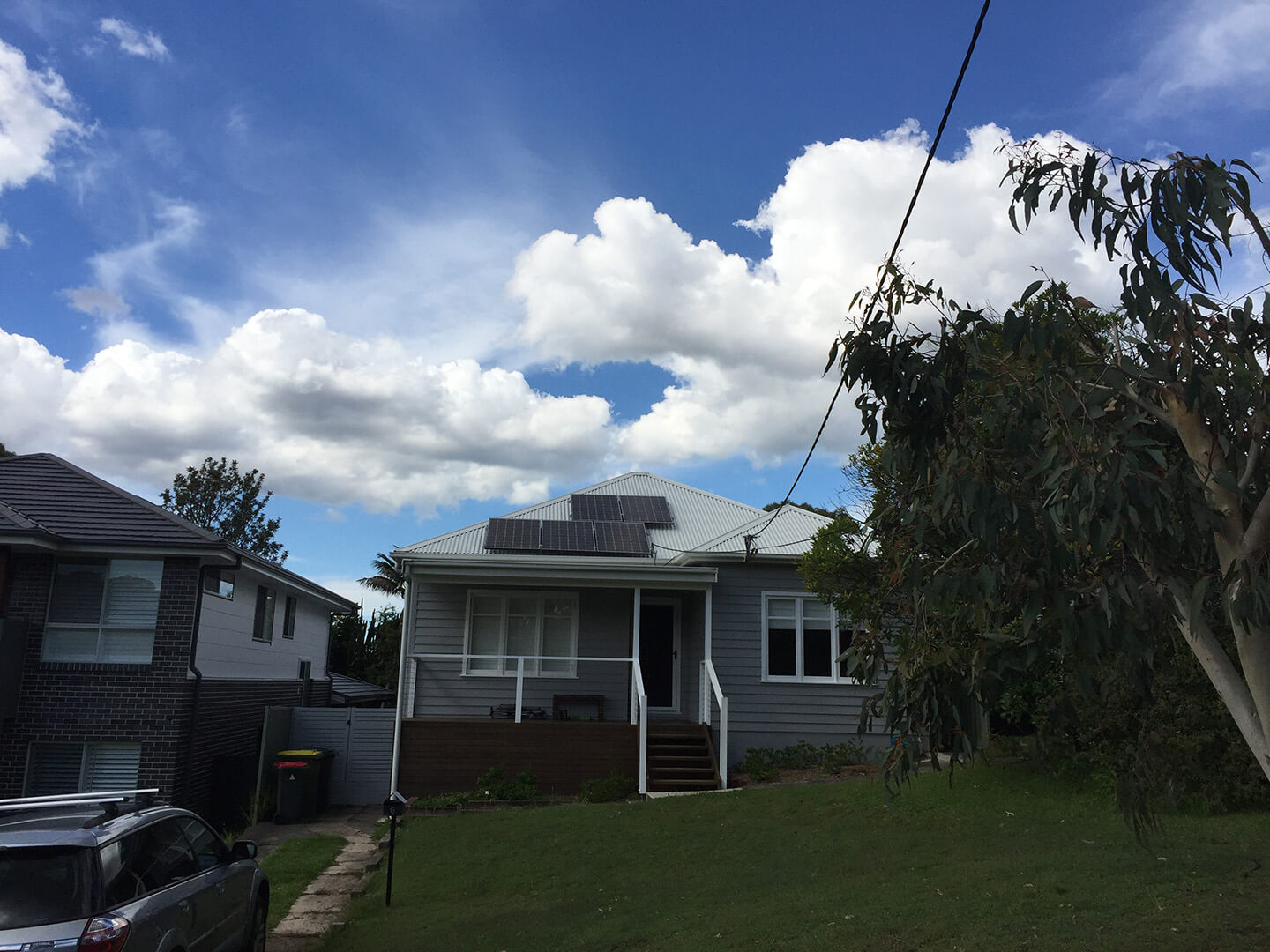 Here are the numbers I used for our investment:

I will report back on actual findings as revised bills come in over coming months. We are running at a bit higher than 20% self consumption and 50% grid independence so far.

Here is the layout of the panels (design image):

The number of panels is:

We got a Solar Edge inverter, which comes with DC optimisers. What does this mean? Well, typically, if 1 panel is not producing as it should, due to shading, or facing a different direction away from the sun compared to the other panels, it brings down the production of all the panels. DC optimisers overcome this issue, and don’t allow 1 or a few panels to reduce the production of the whole system.

For our system, with panels facing 4 directions, there are times where some panels are facing the sun, but others aren’t. Normal inverters can handle 2 ‘strings’ of panels facing 2 direction, but not 4. So the DC optimisers optimise our system to always generate as they should.

Also some more reason why we chose Solar Edge mentioned below.

You can see below, the combination of variety of panels sees solar production occur in April early morning until late afternoon. This is a day when we were away. The Green is solar production, and Red is the grid electricity use, in this case our hot water heat pump. 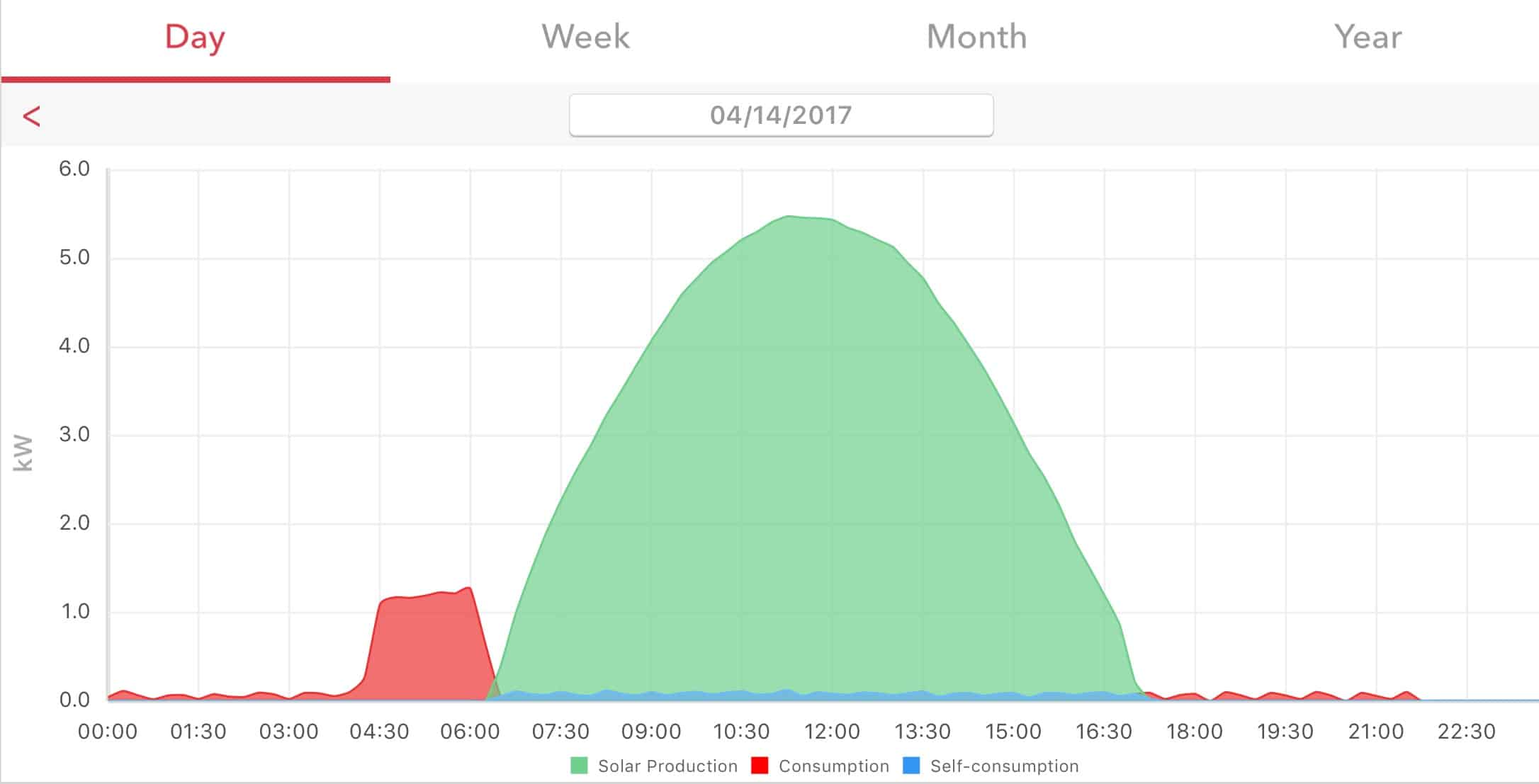 Solar generation and household electricity consumption while we were away

I am really happy with this production AND consumption monitoring capability and early and late solar production, because it is more than a solar system, it is part of your home energy system. We want to be using our solar as much as possible, so are happy to have good generation in the morning and late afternoon.

We have now changed the timing of our hot water heat pump to come on at 11am each day, to use our solar. Heat pumps operate more efficiently when it is warm, so having it run at midday will also assist.

Here you can see solar production with our heat pump coming on at 11am (and the coffee machine and dishwasher going in the morning). 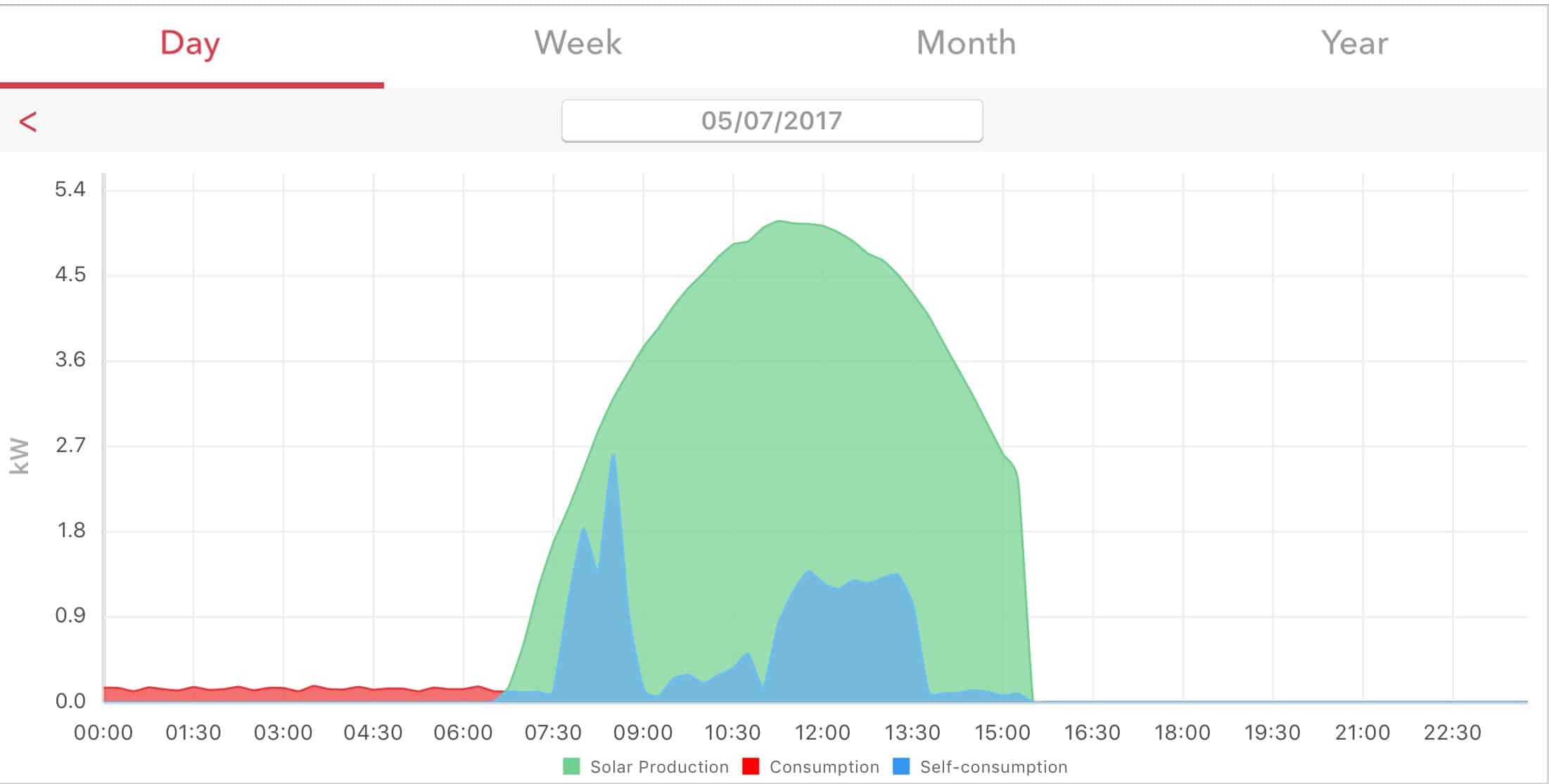 I am really happy we got an oversized solar system. I was not sure how to justify such an expense when I set out, but many great reasons came forward as I went through the process and thinking, and did some analysis. I wrote an article about it, which has been well received and is being syndicated elsewhere. Please have a read when you get a chance.

You may have also noticed that we only have a 6kW inverter for our 7.8kW of panels. Firstly the rating of solar panels is a factory rating, at the perfect temperature, with no losses, when the sun is exactly perpendicular to the panel face. So they never actually produce their rated output.

Also, when converting DC to AC, there are 10-15% losses. All inverters can actually accept higher DC input than their AC input. For Solar Edge 6kW, it is up to 9,000kW from memory. They just restrict the output to their rating of 6kW. Finally, as our panels face different directions, there is no chance they would all be producing at their rating at the same time.

Higher capacity inverters cost more money. It makes sense to put many more panels than your inverter capacity, as the cost of panels can be significantly offset by additional STC rebates you receive.

I estimate we will lose around 0.5% of production annually by the inverter ‘clipping’ our production, but this will occur only when solar is plentiful for us, and we wouldn’t use it anyway.

It’s best to remember, you are not installing a solar farm. You are investing in a home energy system. Non-North facing panels produce less over the year, but this can easily be made up by adding additional panels cheaply (with no additional inverter cost). Having a diverse facing system sees electricity produced more consistently over the day, helping self consumption of solar, and also meaning if there are cloudy parts of the day, you still get a good overall generation day.

An added feature of Solar Edge inverters with DC optimisers is you get to monitor each panel individually. This means you can compare the output of your panels that face different directions, or some panels that are shaded, or also see if there is a fault and a panel isn’t generating as it should. Below is an image of our panel level monitoring for a few week in June. You can see that North facing wins in Winter: 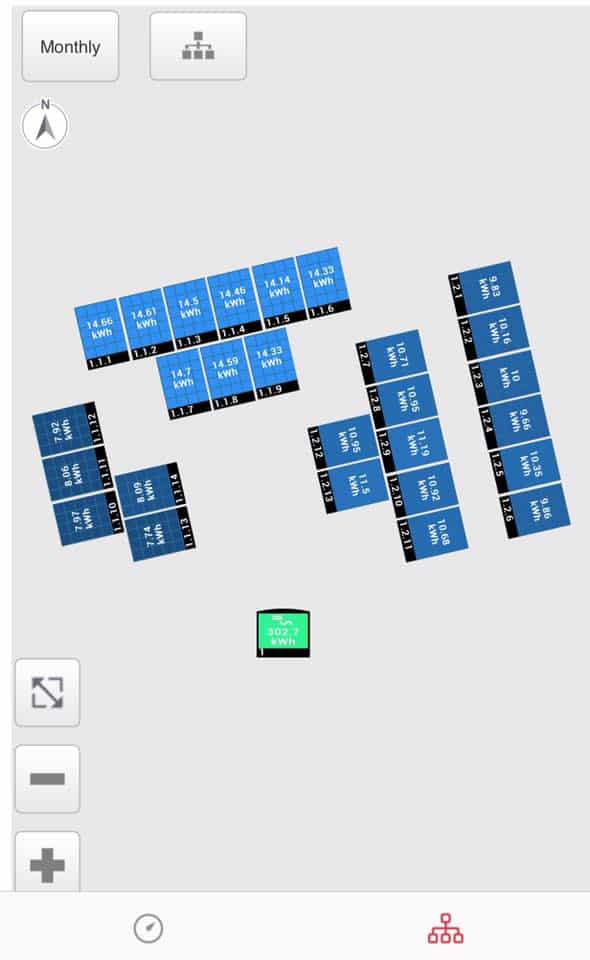 I know everyone in the Shire doesn’t have such unimpeded and abundant rooftop real estate for solar, we are lucky. But there were a few lessons in our system valuable for many situations.

Here is a link to live data for our site

Battery and Reposit and more panels

In November 2017, we added a 9.8 kWh LG Chem battery. As we had opted for additional $700 Storedge, which means a battery can be added on with black out protection, it was a fairly simple addition. Because of our inverter choice though, LG Chem or Solar Edge batteries were our only options.

In June 2019, we added a Reposit battery and cost management system, plus 4 more panels, meaning we now have 9kW of solar.

Under the renewable energy target rules, you are only allowed to put 33% more panel capacity than your inverter capacity when getting solar. However, there is an exemption if you have a battery that is DC coupled. So we added more panels, part funded by more STCs.

We got a Reposit because our local network (poles and wires) company, Ausgrid launched a Virtual Power Plant (VPP) using Reposit. This means that when our local network has peak demand on a hot evening in summer or very cold evening in winter, Ausgrid can utilise our battery to help meet peak demand. This is a trial or pilot, and we are keen to see energy companies use batteries more, so we chose to get Reposit. We are also being guinea pigs to see if the Ausgrid and Reposit VPP could be beneficial for other shire homes.